The Restlet Framework is composed of two main parts. First, there is the Restlet API, a neutral API supporting the concepts of REST and HTTP, facilitating the handling of calls for both client-side and server-side applications. This API is backed by the Restlet Engine and both are now shipped in a single JAR (“org.restlet.jar”). 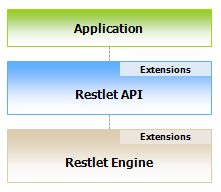 This separation between the API and the implementation is similar to the one between the Servlet API and Web containers like Jetty or Tomcat, or between the JDBC API and concrete JDBC drivers.

Overview of a REST architecture

Let’s step back a little and consider typical web architectures from a REST point of view. In the diagram below, ports represent the connector that enables the communication between components which are represented by the larger boxes. The links represents the particular protocol (HTTP, SMTP, etc.) used for the actual communication.

Overview of a Restlet architecture

In addition to supporting the standard REST software architecture elements as presented before, the Restlet Framework also provides a set of classes that greatly simplify the hosting of multiple applications within a single JVM. The goal is to provide a RESTful, portable and more flexible alternative to the existing Servlet API. In the diagram below, we can see the three types of Restlets that are provided in order to manage these complex cases. Components can manage several Virtual Hosts and Applications.

Virtual Hosts support flexible configuration where, for example, the same IP address is shared by several domain names, or where the same domain name is load-balanced across several IP addresses. Finally, we use Applications to manage a set of related Restlets, Resources and Representations. In addition, Applications are ensured to be portable and reconfigurable over different Restlet implementations and with different virtual hosts. In addition, they provide important services like access logging, automatic decoding of request entities, configurable status page setting and more! 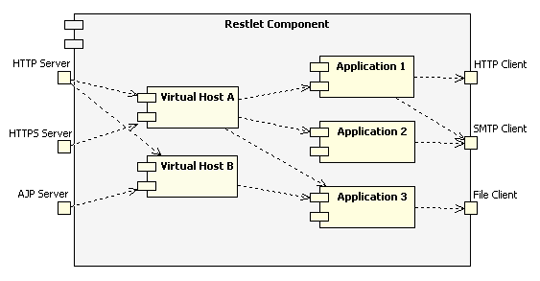 In order to illustrate these classes, let’s examine a simple example. Here we create a Component, then add an HTTP server connector to it, listening on port 8182. Then we create a simple trace ServerResource and attach it to the defaut VirtualHost of the Component. This default host is catching any request that wasn’t already routed to a declared VirtualHost (see the Component.hosts property for details). In a later example, we will also introduce the usage of the Application class. Note that for now you don’t see any access log displayed in the console.

Now let’s test it by entering http://localhost:8182/trace/abc/def?param=123 in a Web browser. Here is the result that you will get: